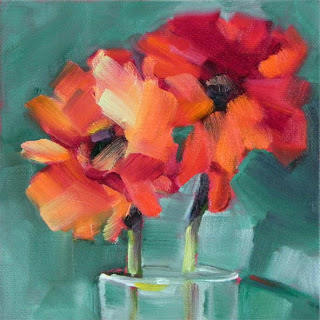 When I saw these hot red Gerbers against the green drapery, I said, "Wow!" But when I began painting, I was in for a surprise. I thought I was seeing a dark object against a lighter background, but I was not. I put the red acetate sheet up and saw clearly that the red was a much lighter value than the green. My problem was to make the red still a "wow" without losing the value contrast and turning the red a washed-out pink. I stayed on the warm end of the palette and used yellows, not white, to lighten the red. I had to sacrifice some intensity, but the flowers still convince me that they are red.

Cheryl
Cheryl Wilson loves making art at her home in Grass Valley, California, where she lives with her husband Bill, the gourd artist, and their sweet, crazy dog, Davy Copperfield.